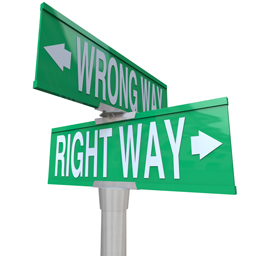 Being in an IRS audit is never a pleasant experience. Sometimes it is unavoidable because often tax returns are just randomly picked for audit or the IRS developing or modifying a particular audit profile. But a number of audits are triggered due to what we call red flages.

Here are a list of 5 red flags that you need to avoid.

Another simple way to get the IRS computer's attention is to report income differently on your tax return than the people who pay it to you report it, via W-2s and 1099s. The IRS computer will try to match all of your payers' numbers, and when they can't, you get a letter. So gather all those envelopes stamped "IMPORTANT – TAX RETURN DOCUMENTS," and tick off all those numbers.

People who own their own (unincorporated) businesses are responsible for reporting their own income and expenses on Schedule C. While some of their income can be cross-checked with 1099s, they are on the honor system for the rest of their income and all off their deductions. Until such time as the IRS decides to check up on them, that is. Because there is room for abuse, the IRS checks these returns more frequently..

People who own their own businesses and report a net loss, rather than net income, merit even more attention. That is especially true if they are also a full-time W-2 wage earner. This is because you are allowed to deduct a loss from your legitimate business, but you are NOT allowed to deduct a loss from your hobby. If you are a W-2 wage earner who also reports a business loss, it looks like you might just be deducting your hobby expenses. (Keep in mind, though, if you have net income, you must report that.)

4. Let's All Be Reasonable

While reasonableness seems like a subjective, innately human issue, the IRS computers are capable of making at least a preliminary judgment of it. In fact, they make a practice of doing just that. With complex statistical formulas, they look at the reasonableness of your deductions as they relate to your income. If they seem out of line, your return gets second look by a human being. So, if some or many of your deductions seem unusually large for someone with your income, prepare for an inquiry.

Tax returns rife with round numbers smack of estimations. When people estimate, they usually error in their own favor-you do the math. No, really, do the math, and put specific numbers on your tax return; not estimates.

BONUS – Isn't That an Oxymoron

The IRS seems to think so, about the "home-office" deduction. It was once an area of considerable abuse, which always leads to a crackdown. The IRS Code stipulates such strict rules for the home-office deduction that few people qualify for it. When it shows up on a return, the odds that the return will be examined are substantially increased.

This site uses Akismet to reduce spam. Learn how your comment data is processed.