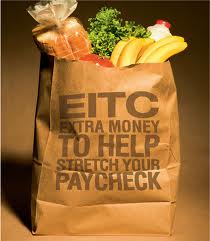 The Earned Income Tax Credit has made the lives of working people a little easier since 1975. EITC can be a boost for workers who earned $50,270 or less in 2012. Yet the IRS estimates that one out of five eligible taxpayers fails to claim their EITC each year. The IRS wants everyone who is eligible for the credit to get the credit that they’ve earned.

Here are the top five things the IRS wants you to know about this credit.

1. EITC is valuable.  The EITC not only reduces the federal tax you owe, but could result in a refund. You base the amount of EITC on your earned income and the number of qualifying children in your household. The average credit was around $2,200 last year. If you qualify, the credit could be worth up to $5,891.

2. Review your eligibility.  If your financial, marital or parental situations change from year to year, you should review the EITC eligibility rules. Just because you didn’t qualify last year doesn’t mean you won’t this year.

3. File your return.  If you are eligible for the EITC, you must file a federal income tax return to claim the credit – even if you are not otherwise required to file. Remember to include Schedule EIC, Earned Income Credit, when you file your Form 1040. If you file Form 1040A, use the EIC worksheet and keep it for your records. If you use IRS e-file to prepare and file your tax return, the software will guide you and not let you forget this important step. E-file does the work and figures your EITC for you!

5. Call Creative Tax It’s easy to determine if you qualify. The EITC Assistant, Simply give us a call at (310) 562-1300 and we will help determine your qualifications.

This site uses Akismet to reduce spam. Learn how your comment data is processed.